Hurricane Ivan tore through the state of Alabama yesterday–giving Ian his first weather emergency and his first major power outage. 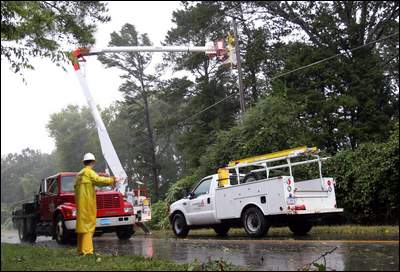 Most of the Tuscaloosa-Northport metroplex is back on the grid, but not Bellwood. This photo is of a work crew restoring power not in our neighborhood.

I swear, the moment a robin sneezes near a power line we lose electricity. It went out sometime before 5:00 a.m. Thursday morning–before I could brew my morning coffee! Came back on briefly at 7:30 and has been out ever since.

So we’re guessing that lil ol’ Bellwood is pretty low on the priority list. I called AP to report the outage and their automated system told me it’d be restored by 5:00 p.m…. September 21st. Five days from now!

The galling thing is that the outage is so spotty. There are houses less than 50 yards from us that have power.

Misery loves company and we don’t have much when it comes to lack of power.

Odd thing is, the rainfall wasn’t that much. Less than an inch, according to Weather.com. It was really just like a normal rainy day, with a bit more wind than average. The big stuff was a little east of us. We really dodged a bullet here.

Fortunately, it was fairly cool yesterday, but today the temps should be in the mid-80s. It’s going to get pretty uncomfortable in our little house without air conditioning. If it weren’t for Ian, we’d be camping out in movie theaters. Hell, if it gets too warm we may yet be.

This site uses Akismet to reduce spam. Learn how your comment data is processed.